How You Can Make a Bitcoin Wallet App Today

Bitcoin app development is becoming its own pocket industry.

Cryptocurrency is in the news every day, and people are quickly learning that they need a fast, secure, and easy to use a mobile app to take advantage of the tech.

There are great opportunities for entrepreneurs to bring something unique to the field, but it’s important to plan out your app first.

If you’re new to the cryptocurrency world, then you might need a refresher on exactly what a bitcoin wallet is, and why it’s needed.

The name is something of a misnomer. The wallet contains no bitcoins. A closer analogy might be the key that unlocks your safety deposit box at the bank.

The difference with bitcoin is that because it’s decentralized and digital, you never need to go anywhere to access your money.

With a bitcoin wallet app, you carry the key in your pocket, and it accesses the bank over the Internet.

So, while your wallet doesn’t actually hold your bitcoins, it’s still your primary means of accessing them. That’s why any bitcoin wallet app needs to be well-designed.

In this article, we’ll go through the most important features that any good wallet app needs. We’ve sorted features into several categories.

Keep reading, and we’ll elaborate on all of these. We’ll also talk about how to actually get started in bitcoin wallet app development.

Important Features to Code Your Own Bitcoin Wallet

Bitcoin wallet development, like all software, starts with a heavy dose of planning.

You need to consider every aspect of your product before you type a single line of code.

Here are the broad categories to consider, and some specific tips for each. 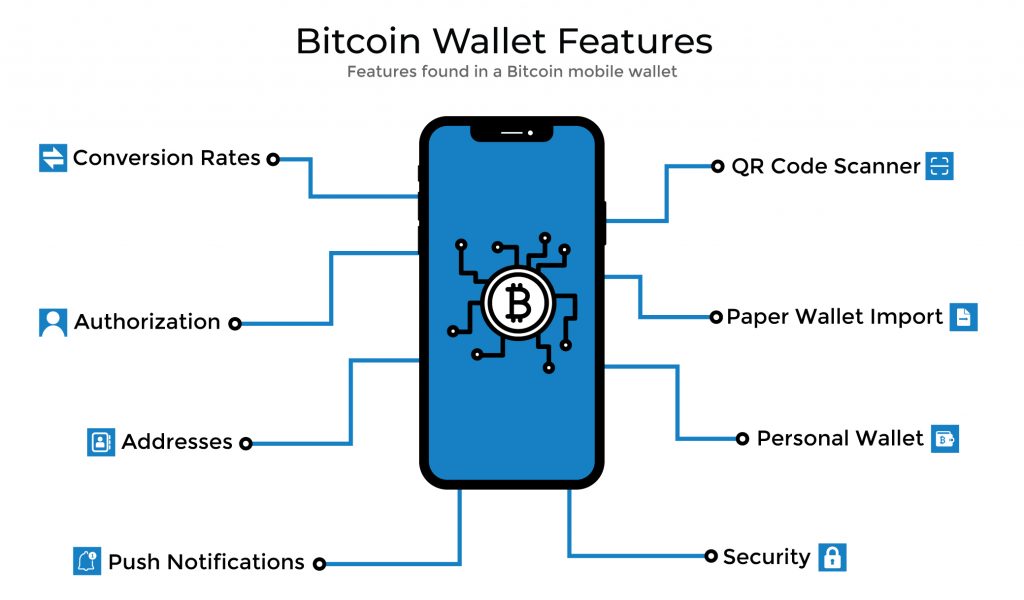 It should go without saying that security should be the top priority for any development company.

Without the ability to keep the coins safe, nothing else matters.

Bitcoin security has some similarities to security in traditional banking apps, and some of these features will be familiar if you’ve used one of those.

Others are unique to the world of blockchain security, but are equally important.

The simple truth about passwords is that they’re no longer enough.

Access to the wallet needs to be gated by two-factor or multifactor authentication, either using one of the existing apps, a text message, or your own scheme.

Have a Blockchain Project in mind?

Although it’s unlikely that many current bitcoin users use weak passwords, the currency is booming.

It won’t be long at all before lay users are involved with crypto, and they will need to be protected.

Another feature that protects laymen more than power users, timed logout is still essential to any successful cryptocurrency wallet app.

Just like on banking websites, users should be automatically logged out after a short period of inactivity, or if the device is locked.

There isn’t an industry-wide best practice for the length of time before logging out, but five minutes of inactivity is common.

Users are accustomed to this on the web, but it’s a tougher sell on mobile. People tend to prioritize convenience over security, but this is one area where you shouldn’t budge.

At the very least, offer an option for timed logout.

The fact is, mobile is inherently less secure than the web, by simple fact of physical accessibility.

It’s rare for someone to misplace their laptop while logged into a bank, to say nothing of desktop.

Mobile devices, on the other hand, can easily be dropped, left behind in cabs, or outright stolen on the street.

And besides, mistakes happen. Even the most tech-savvy user can make a silly blunder, as Apple found out in 2010.

The biggest successes in bitcoin application development know when to butt out.

For users, there’s no legitimate reason for a third-party server to store their private key.

No matter what speed gains or usability features you might be able to accomplish by storing private keys outside the app, resist the temptation.

Remember to prioritize the security of users’ funds. The most important thing is that your wallet app can be trusted as a way to safely access bitcoins.

By storing the private key server-side, the biggest thing you’re accomplishing is opening yourself up to hacks, and therefore lawsuits, and that’s just not a risk worth taking.

By keeping the private key local on the user’s device, there’s no chance that you can lose it.

Although a bitcoin wallet isn’t a bank, you should still offer some of the same security features.

Spend in a new place, or an unusual amount, and you’ll receive a text or call from the bank asking you to confirm the transaction.

Say no, and the payment is denied, simple as that.

Those types of advanced analytics might be out of reach for many cryptocurrency wallet development budgets, but you can implement a crypto-specific version quite easily.

If a user makes a payment and then tries to make a repeat payment to the same address, ask for confirmation.

Any good wallet app will generate a fresh wallet address for every transaction. If someone is trying to get coins into the same address twice, there’s a good chance they’re up to no good.

So tell the user, and you’ve stopped one of the most common forms of bitcoin fraud. 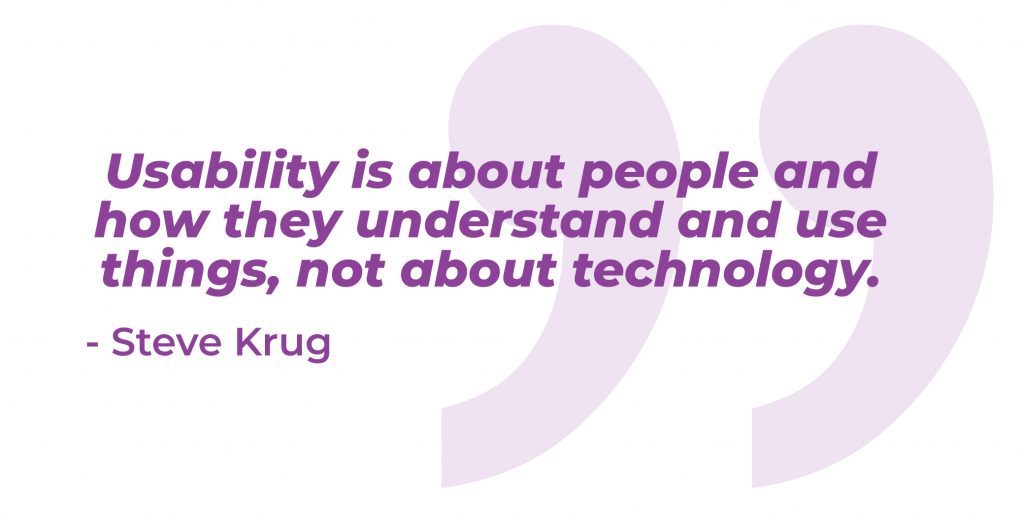 After security, the next most important piece of a bitcoin wallet app is usability.

Also called quality-of-life features, this refers to anything that makes using your app a pleasant, convenient, and above all, fast experience.

In the event a device is hacked or lost, one of the first things any user will want to do is a remote wipe.

You can make that process much less painful by facilitating the backups of the wallet.

The most secure backup will be to the user’s own computer or an SD card that they remove, but integrating secure cloud storage apps like Dropbox or Google Drive are much more convenient.

Like automatic sign-out, you’ll have to strike a balance between serving your user and pleasing them. What some users want might not be the safest thing for their coins.

The best option, if you can budget for it, is to let the user decide. Support both.

When developing a high-tech application like a bitcoin wallet, it’s easy to forget that you are, in the end, making an app.

Niceties like an attractive look, smooth guidance from function to function, and a good help file are more important than they might seem.

There are hundreds of bitcoin wallet apps out there, and impressions matter.

You need to set yourself apart to stand out.

If your app does everything it needs to do, but it’s ugly and hard to use, then users won’t stick with it.

They’ll happily keep looking for something else that meets their needs without making their eyes hurt.

There are plenty of in-depth guides out there for best practices in UI development. Make sure you’re not making mistakes that will set your app apart in a bad way.

Another feature common to traditional banking software, push notifications are a must-have for any modern mobile app.

Users want to know when things happen to their coins. Whether it’s a request for payment, a successful sale into fiat, or large changes in coin prices, it makes sense to put the information up front.

For extra points, allow users to customize their alerts. For example, they may want to know if the USD to BTC conversion rate hits a certain high or low point.

You could even get creative, and offer features like geo-locating nearby stores that accept bitcoin, or offers from online vendors.

Just be sure to offer granular control of which notifications are pushed, or you risk alienating users.

Finally, there are some features that will really help differentiate your app from the competition.

These might not make or break your entire product, but they will contribute to its utility and sizzle.

Bitcoin represents a new paradigm for money, but it is still money.

And money needs to be budgeted.

Your users will appreciate if you can give them some basic bank-style features to keep track of where their coins are going.

Letting them create accounts like “Entertainment”, “Food”, “Work Expenses” and so on will save them the hassle of entering these items into a separate budgeting program.

Especially since most of those don’t even deal in bitcoin yet.

More and more people are using bitcoin in business as well, where these features are not optional.

It’s not difficult to let users categorize transactions in this way, but it represents a large boost to quality of life.

Wallet addresses are long and complicated, and expecting people to type them is unreliable and inconvenient.

So, every bitcoin wallet app needs a QR scanner.

Actually, many apps have three scanners. One for public keys, one for payment requests, and one for private keys.

The user goes to the “Send Coins” page, for example, and then scans the code for their recipient’s address.

But you can do better than that.

By building some logic into the app to differentiate between the different places QR codes lead, you can make your users’ lives a lot simpler.

This allows you to streamline your interface quite a bit by placing a large, prominent “Scan Code” button on the interface.

Users can go there for a one-size-fits-all scanner that will handle all their bitcoin needs.

Bitcoin is gaining traction, but most people still think in fiat.

If you’re hoping to buy a sandwich with your coin, or do just about anything besides trade, then you’ll likely want to know how much it’s worth in traditional currency.

You can facilitate this by allowing users to enter transactions in either BTC or the fiat of their choice.

If a user wants to loan their friend $20, they’re much more likely to use your app if they can type in $20, and not have to look up the current exchange rate (0.00298 BTC at the time of this writing, for the record).

Actually selling the coin for fiat is more complicated, of course, but this information feature is another “nice-to-have” that will make a big difference in your app’s user experience.

If you’re hoping to build your own bitcoin wallet, you’re already thinking about all of these features and maybe coming up with some of your own/

But there’s something else to consider, particularly if you’re new to the field.

Who’s going to code all of this for you?

Creating an app of any kind is a grueling process. Creating one that leverages complex new technology like blockchain is incredibly difficult for a novice software engineer.

You can shortcut all of that by working with an outsourced software developer.

Offloading the heavy lifting of design and coding to a team that’s done it before can literally cut years off your development cycle.

Ignite has over a decade of experience with apps of all kinds. By utilizing the best in offshore talent, we do it at a bargain price.

Whatever your plans for your app, we can help. For a free consultation, fill out the contact form.